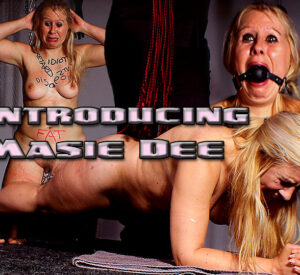 Masie Dee, who performed Daisy in HBO’s Game of Thrones TV series, finally joins us after nearly a decade of asking to be a ShadowSlave. The bubbly blonde is quickly left in no doubt that this isn’t just another appearing process as she is summarily stripped and inspected, and Magick unearths her wanting. Having put on a few kilos on the grounds that we saw her on our TV screens, she is taken through a cruel and rigorous workout routine, as he encourages her with slaps and whips, and points out her shortcomings without mercy.

She is pushed to the factor of exhaustion as he derides and berates her for letting herself go. Her unshaven cunt is any other point on contention as her pubic hair is cruelly pulled and twisted. Admitting she has allow us to down, she is advised to hit herself as she apologizes and acknowledges her failings.